When it became clear that there had been a dereliction of duty on the part of Government during the exit negotiations to ensure that the disgracefully few GNSS LPV approach procedures in the UK could continue after 31 December 2020, AOPA were at the forefront in demanding action by the DfT and CAA to rapidly resolve the issue. Whilst supportive, the CAAs hands are tied through Government policy.

AOPA have been involved in the Project GAGA, (GNSS Approaches for GA) aimed at providing smaller airfields with the ability to implement GNSS LPV procedures. The progress that project was making with three airfields was itself hampered by changes to Civil Aviation Publications (CAPs 1122, 1616 and now 1961) which lead to delays.

So AOPA have probably been more aware of issues that walking away from EGNOS without an alternative was a devastating misjudgement by the UK Government. (NOT DfT or CAA).

Notice has been given to the UK that the current EGNOS Working Agreement (EWA) expires on 25 June 2021, after which, without another EWA in place, no published procedure will be able to use the vertical guidance provided by EGNOS the European Space Based Augmentation System (SBAS).

The UK will be the only G10 member state without an SBAS. AOPA with industry partners is continuing to lobby the Government; EGNOS is not a tradable service as far as BREXIT is concerned: Its infrastructure.

This is from the latest EGNOS Bulletin 35 Spring 2021: 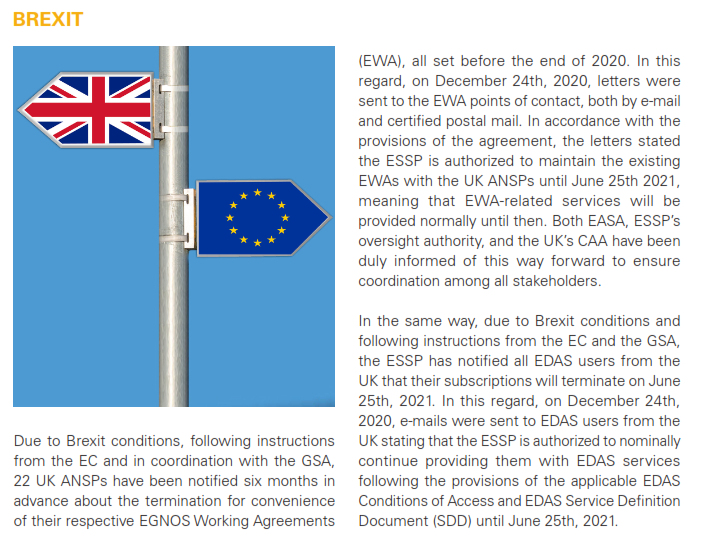 Some have suggested that even though the current EWA will expire on 25 June 2021 the relevant vertical guidance signal will still be there and so can be used. AOPA have raised this with the CAA and DfT to clarify the legal position on the continued use of vertical guidance from EGNOS without an EWA. Doing so appears to fall outside of the European legal framework which covers safety of life applications such as LPVs and could put the UK in a difficult legal position with the EU.

The CAA has today told AOPA that their lawyers are discussing with DfT lawyers what might be legally possible. AOPA has said without a legal framework it will be unlikely that the UK CAA/DfT could accept a liability that cannot be insured against. Without an assurance of the signals performance, which is delivered through the EWA, this appears to be disaster of our own making.

AOPA will continue to take the lead in lobbying for a solution.